If you’re having trouble getting your dab rig to produce much smoke, there could be a few reasons why. In this blog, we’ll explore some common causes of low smoke production when dabbing and offer tips on how to fix the problem.

Reason 1: The nail is too cold

A cold nail is one of the most common causes of low smoke production when dabbing. When the nail is too cold, it can’t effectively vaporize the dabs, which can result in less smoke. To fix this problem, try heating the nail for longer before placing the dabs on it. This will ensure the nail is hot enough to vaporize the dabs properly.

Reason 2: The airflow is blocked

If the airflow to the nail is blocked, it can prevent the smoke from escaping properly, resulting in low smoke production. To fix this problem, try cleaning the nail and the dab rig to remove any obstruction. If the problem persists, you may need to replace the nail or the dab rig itself.

If you’re using a domeless nail without a carb cap, it is possible that the dab rig may not produce a lot of smoke because the airflow and temperature may not be properly regulated.

Reason 4: The dabs are too cold

Another potential cause of low smoke production is cold dabs, which are less common. If the dabs are too cold, they may not vaporize properly, resulting in less smoke. Try warming the dabs up before placing them on the nail to fix this problem. You can do this by holding them in your hands or placing them near a heat source for a few minutes.

Reason 5: The dabber tool is too cold

In some cases, the dabber tool itself can be the cause of low smoke production. If the dabber tool is too cold, it can transfer that coldness to the dabs, making it difficult for them to vaporize correctly. To fix this problem, try warming up the dabber tool by holding it in your hands or placing it near a heat source before using it.

By addressing these potential causes of low smoke production, you should be able to get your dab rig working correctly and producing plenty of smoke. Just remember to use caution and follow proper safety guidelines when dabbing, and you’ll be able to enjoy the many benefits of concentrated THC. 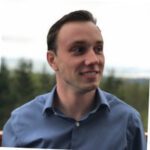 Dustin Schuler is a Marketing Manager with over 6 years of experience in the industry. In his free time, Dustin enjoys riding bikes, driving, hiking, and trying new hot sauces.

Dabbing has become a popular way to consume concentrated forms of THC, and a dab rig is a specialized piece of equipment used to vaporize dabs. If you’re new to dabbing, it can be intimidating to try and figure out how to use a dab rig, especially if you’re using a quartz nail for the…